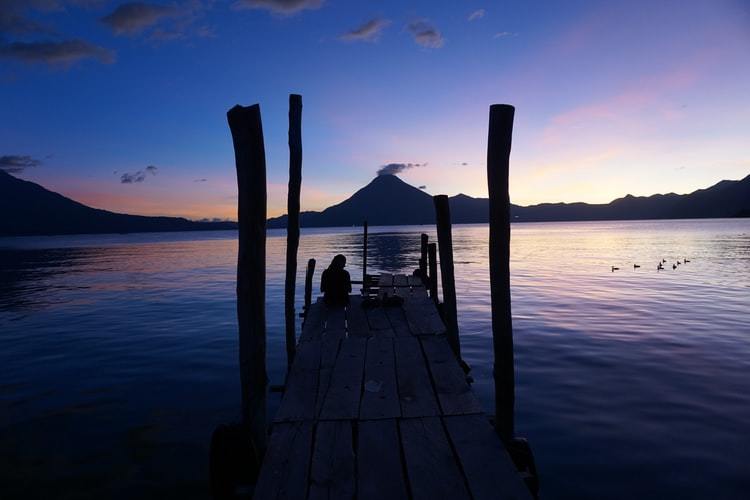 Years ago when I was living in Xela, Guatemala…

I was working for an NGO as you can read here.

Well, in my free time, I would basically just hike around and visit various mountains and volcanoes in Guatemala.

As you can read here by checking out any of the other articles I have on my time in Guatemala.

Anyway, one of those hikes ended up being the longest hike I ever took in Guatemala.

If I remember right, I think it might have been 3 or 4 days more or less from Xela roughly speaking.

The hike to Lake Atitlán.

A part of Central America that, from what I saw there, seemed to have a decent amount of foreigners living nearby.

More of the “free love” type or however you would describe them – hippie almost?

Regardless, the lake itself was without question the most beautiful spot of Guatemala that I had visited.

Of course, there are other amazing areas of Guatemala that I have written about here…

But Lake Atitlán definitely was a lot more impressive in terms of appearance.

Though before we get to my time there, let’s cover some basic facts about the place so you can understand something about it first…

Then get to my trip.

As the title of this article suggests, Lake Atitlán is the deepest lake in Central America.

Technically, the name Atitlán means “between the waters” in the Nahuatl language.

And it has been known for a long time as being one of the more beautiful lakes in the world.

It has a certain cultural relevance internationally as famous writers like Aldous Huxley writing about it in his travel book in Beyond the Mexique Bay.

And outside of the relevance for its beauty…

The lake also has a lot of local cultural and agricultural importance also.

With a history of ceremonies being performed in the area by the locals going back centuries.

It also has a significant agricultural importance in that a variety of crops, such as coffee and avocado orchards, are grown locally in the area.

Among other agricultural crops that are grown in the area…

All around support the local economy…

But the lake supports the local economy in other ways given its touristic value bringing in plenty of foreigners and locals visiting the lake each year.

Anyway, the lake has had also an interesting geological history.

The first volcanic activity occurred about 11 million years ago and currently has a variety of volcanoes in the area.

Ecologically, the lake has had an interesting history over the last century or so. It used to have a variety of various fish species and also a bird species called the Atitlan grebe.

But, in order to encourage more tourism and the local economy, the Guatemalan government took the advice from the Pan American World Airways to introduce the black bass into the lake.

Which helped contribute to the extinction of more than 2/3s of the fish species in the lake and the Atitlan grebe.

On a more grim note, the lake also has a dark history in recent times with the Guatemalan government using the area to disappear hundreds of people during the Guatemalan Civil War.

Regardless of some of the grim history, Lake Atitlán has, as noted in this article very briefly, a very important and interesting cultural, agricultural, economic, ecological and geological importance to Guatemala.

And if you are visiting Guatemala, I’d say this is one of the more important places to visit if you have the time for it.

So let’s get to my experience visiting this area.

Similar to other times when I took tours visiting mountains, volcanoes or lakes in Guatemala…

I would use tourism agencies in the country to have some guide take me there along the hike.

Anyway, there was some group called QuetzalTrekkers that organized a lot of good tours.

And, in my experience, they were pretty professional.

From what I remember, they were basically foreigner run for the most part or that was my impression anyway.

They would take random foreigners who showed interest in helping be guides and then train them to be professional volunteer guides to run what they were doing.

Though I think they were compensated in some way – maybe free food or something.

Either way, they were pretty good.

And, given my lack of Spanish in the time, kinda nice too in that at least I had a better understanding of what the guide was saying given this was like 7 years ago or something.

Back when my Spanish was a lot shittier.

Anyway, the hike itself from Xela was a bit longer than most hikes at the time – maybe 3 or 4 days more or less from my memory.

Here’s some photos of the initial part of the hike.

Whoever won got something – maybe a beer or something.

Anyway, I didn’t win but the dude who got the closest to winning was some former Israeli military dude who was part of our group.

Though he didn’t win either and he was pretty athletic looking.

Anyway, here are more photos of the hike itself.

And finally, we got to the actual lake itself in the very early hours of the morning on one particular day…

So here are some photos below of the Lake itself from what I saw in those hours.

Afterwards, we basically decided to walk around the lake and to the nearest town called San Juan La Laguna.

Here are some photos around the lake as we kept walking around.

Including a photo here of this cow that blocked our path briefly.

And finally, here are some photos of San Juan La Laguna below.

To which we ended up getting some coffee and food from what I remember at this place below here.

Which had a little museum with photos you can see.

Anyway, that is the basics of the trip.

Here is a final video of the place from some dude on Youtube.

Looked like a good video to me and I think it shows the area well.

One observation I remember having of this place was wanting to hike all of the volcanoes I saw surrounding the lake.

If I ever return – which I plan to someday whenever I’m around Central America again – I’d love to hike those volcanoes I saw.

Anyway, it was an amazing place to visit and just another example of some of the incredible scenery you can see in Latin America.

Despite its faults, Latin America truly is a beautiful part of the world with so much to see.

Got any questions or comments yourself?