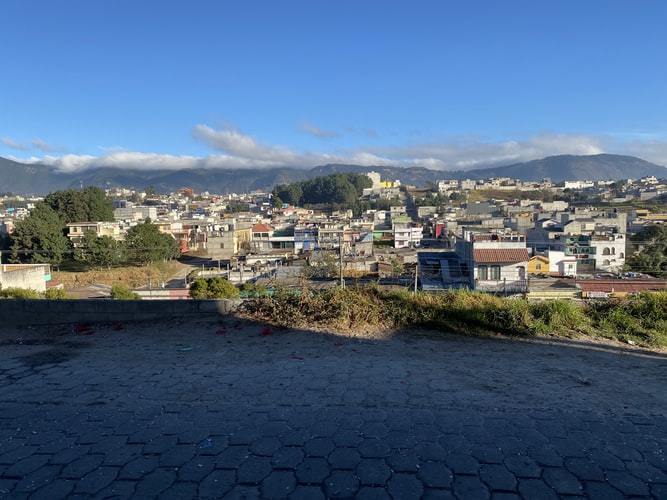 As I wrote about here…

I spent a few months in a Guatemalan city called Xela.

In those days, I was mostly just trying to improve my Spanish by taking classes at a local Spanish school…

While at the same time keeping myself busy working for an NGO.

Anyway, the NGO I was with was basically meant to help serve a poorer neighborhood called Las Rosas.

Or the Roses in English.

Anyway, they had a building in that neighborhood where kids from the neighborhood could be dropped off to engage in activities, learn how to do certain things, etc.

All the while allowing mothers in the households more free time to pursue activities that might be beneficial to the family or just relax in general.

So, during my time, I was in charge of helping run some efforts in fundraising money online for the NGO so that they can afford more stuff for the children.

At the same time, we would sometimes visit homes of the communities that the NGO was meant to serve in order to gather basic information about the community.

While at the same time just building a better connection with those living in the community.

As the NGO itself was run by some foreigners mixed with some local Guatemalans also.

Either way, this article looks into just that – with the approval gotten.

To talk about the circumstances of one of the homes we visited and how things are progressing in the community Las Rosas.

So we leave the NGO that we were working at to go check out some of the homes that the NGO serves.

Below here you can see some photos of the community at large.

Anyway, we check out different houses.

Before getting to our last one from what I remember – we had to walk uphill a little bit.

As you can see in some of the photos of the path going upwards here.

The path was a bit narrow at some points but it wasn’t much of a long walk either.

We passed this cow along the way as you can see here.

We get to the top there and you could see the entire neighborhood from on top.

As you can see in this photo here of the neighborhood that we could see.

And once on top, we visited the final home of the neighborhood that we planned on visiting – this house of this older woman.

The Story of a Family

As you can see here, we visited this house in Xela and they allowed us to take photos inside and publish them elsewhere.

From my notes and memory, there was just one middle aged looking woman who we met there.

There were some other folks who lived there – some guy and some children as well.

But they weren’t there.

From my notes, the husband in question worked selling stuff on chicken busses mostly.

However, they did have some livestock that they attended to – as you can see here.

And that was how they got by mostly – with work regarding the animals they had and also any money the husband made on the side hustling.

The lack of good paying jobs in general…

They explained how they were getting by and were managing to save some money little by little each money with the money that the husband was making on the side.

While, as the kids were able to use the services from the NGO, the woman in the family was able to put down more work towards making money as well for the household.

So, in short, we were better able to see how the work of the NGO was helping those in the community.

By, as said before, giving the mother more free time to work on side to support the family herself as well.

Which, in her words, made a decent impact on their ability to save a little bit of extra money each month.

At any rate, despite the difficulties they were facing economically, they were optimistic that they were getting ahead at least little by little with the hard work they put down.

What was the point of this article?

In short, it was to illustrate, to a degree, the situation some folks live beyond the touristy areas that most foreigners associate Guatemala with like Antigua or Tikal.

And to bring light to the situation of folks in areas not often ever visited by foreigners in general.

Because, in part, you do come across the occasional foreigner who spends a few weeks in the more touristy areas…

Areas that tend to be more “santizied” so to speak in that many of the problems of society are brushed under the rug.

And while that is cool – those areas don’t always provide a view into life in the rest of Guatemala.

But, on top of that, this article is as well meant to mention or briefly bring to light some of the work that NGOs that can in some of these communities.

While also, more importantly above all else, bring light to an example of normal folks working hard to improve their conditions.

Because while an area like Las Rosas might be seen as just a place of poverty by many.

It is also an area, as the name suggests, full of “roses” so to speak in that there are good honest people everywhere working hard to improve their own conditions and their communities.

And, to a degree, this article illustrates that briefly by looking into the life of one particular family that works hard to make ends meet and improve their own conditions.

Despite many of the negatives that you can find with life down here in Latin America, there are also many good things as well.

Here is a video, by the way, of Xela for those interested.

At any rate, if you have any questions or comments, drop them below.