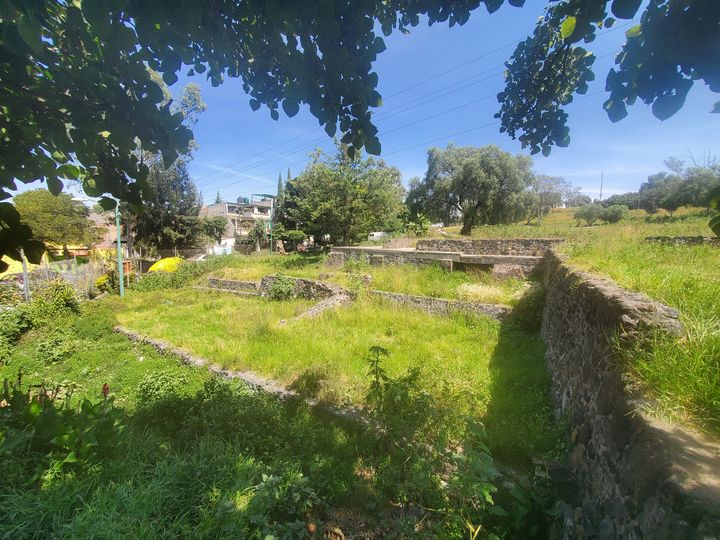 When people think of archeological sites in Mexico City, there are a few obvious ones that come to mind right away.

For example, you have Teotihuacán.

You also have that little pyramid in the Pino Suárez metro station.

Among some other very well known historical spots in the city.

Outside of that though, you have some lesser known spots not many foreigners think of.

For example, you have the Tenayuca Pyramid in Estado de Mexico but it happens to be just slightly north of Mexico City.

You can get there by going to the cablebus La Pastora or getting to the metro station Politecnico and taking a taxi from either location.

Though La Pastora is a bit closer.

Beyond that, you then have certain archeological sites that basically very few people outside of maybe UNAM archeology students and locals that live near them know about.

And, even when it comes to locals living near these sites, not all of them will know what you are talking about if you wish to visit them.

Mexico City actually has a few of these sites that, if you happen to like Pre-Hispanic history or Latin American history in general, are worth the trip.

At least if you have as much time as I do living in the city.

For those who do like history of the city, they make for nice little gems to visit and appreciate.

Let's get to some examples of what I mean.

Searching for the Archeological Sites of Iztapalapa

In Iztapalapa, there are two archeological sites worth mentioning.

There is one that you will find going onto Cuitlahuac street in the neighborhood of El Santuario of Iztapalapa.

This one is called "Basamento Construcciones Antiguas."

There is another that Google Maps says has the exact address of Mision 2 in the same neighborhood of El Santuario.

This one is called simply "Zona Arqueologica."

A week or two ago, I visited the first one by Cuitlahuac.

I had a taxi driver take me around various points of Iztapalapa.

With my phone battery dying after spending so much time taking pictures of so many spots, I figured we'd visit this one zone as it was close to the museum we left known as Museo de las Culturas Pasion por Iztapalapa.

At first, the driver was having difficulty finding the road to turn onto.

It's not a hidden road by any means but his phone was leading him down the wrong path.

We quickly find out which road it was and it was some gravel road from what I remember.

Once you find it, all you have to do is stick to the road and go down it for about 30 seconds more or less.

Turn around the corner of the fence and you'll see a gap in the fence that you can walk through.

That is where you'll see this archeological site.

It seems to be located in front of some random dude's house.

There is nobody there.

You won't see a single soul visiting this spot.

The taxi driver never even heard of it.

And there's obviously no tour guides, nobody at an "entrance" to greet you or anything.

There's also basically no information online about this spot from what I checked in English or Spanish outside of it being Pre-Hispanic Volcanic rocks.

Not sure if they were connected to any indigenous group or what exact year they are dated to.

Here is a picture of the area.

You can enjoy this spot for about 5 to 10 minutes before it gets boring.

Cool to visit and look at though.

You do wish there was more history published about it online.

After that, I went back to my apartment.

On another day, I decided to look for this other archeological spot on Mision street.

Here is a screenshot of what it is supposed to look like according to photos from Google Maps.

Unfortunately, we did not find it.

My Uber driver was set to show up to this exact address and all I saw was that redish looking building you see in the screenshot.

I did see a fence higher up above us and assumed maybe it was up there but saw no stairs to take us up there.

I then asked some locals I saw playing soccer in the street if they knew about this spot.

There were a few ladies watching their kids play soccer.

She was confused at first until she saw the screenshot I showed you and told me and my driver the direction we need to take to get there.

Apparently it is higher up and around the corner.

A quick 1 minute ride will take us there.

So we followed her directions.

Took us to a place called "Centro Social Villa Estrella" as you can see here.

Wait a second -- you see that photo on the upper right corner with the green space? Could that have been it? Motherfucker, I'm going back!

Anyway, when we did get there, the police guy at the front told us there is nothing here that I am talking about.

He thought I was looking for the main archeological site nearby on Cerro de la Estrella Mountain that I wrote about here.

I had already been there and that was not what I was talking about.

Which, by the way, that is something that happens.

You might be looking for a very obscure spot and the local thinks you are confused looking for the main touristy attraction nearby and they might try to take you there.

I had the same thing happen to me when I was looking and found a lake that no tourists visit in Xochimilco when they thought I was looking for the famous canals as I wrote here.

In such scenarios, you need to know Spanish and to explain clearly that you have already been there and are looking for this other spot so they don't take you away to what they think you are looking for. Make sure to have photos or screenshots of the spot from online and the address with a description of it and what is near the site ready.

Anyway, on another attempt, I did ask a separate taxi driver about where this spot could be located but he assured me also that it wasn't in that Centro Social Villa Estrella because he has been there plenty of times with his kids and he's never seen anything like that there.

However, if you look at Google Maps, clearly this place seems to exist based on the few photos of it and, if you look carefully at the map, where else could it be?

There was another field though across from that building so maybe there?

If I ever get around to it (perhaps tomorrow), I'll check again and give it one last swing.

Lost Looking for an Archeological Site of San Pedro Atocpan

In Milpa Alta of Mexico City, there is a town called San Pedro Atocpan that Google claims has an archeological site.

There are even pictures of it online.

Here's a screenshot of it.

There's also a few random websites that reference this spot as existing as you can see here for example.

When I first visited Milpa Alta as I wrote here, I had my driver take me to that exact spot with the address provided by Uber.

Unfortunately, Uber led us down a narrow road that reached an end and all we could see is the green space in the distance as you can see here.

Perhaps the archeological zone was somewhere in the distance and we would've had to hike to it?

But, if I remember right, it was a little bit of a steep drop and so we couldn't have been able to go down from that point to check out the are and look for this zone.

So we left a visit to this archeological point to be done at another time.

With literally people coming out of their homes looking down on us confused as to what we were doing in the area.

They probably don't get many gringo visitors looking for this spot. Probably not many Mexicans either.

While the place looks cool online, I will only be able to try again at visiting it if I ever move to Milpa Alta for a month.

Given how far Milpa Alta is from everything else in the city, I'd much prefer to be living in the area to try again.

If I was to do that, I'd probably join some local Milpa Alta Facebook groups and ask anyone if they know about the area and how to visit it.

I imagine -- similar to Iztapalapa -- that most people won't know where it is as likely most of the locals are living their lives and not focused on visiting this relatively obscure place that has no tourists visiting it (likely not many Mexican ones either given it only has 2 reviews on Google).

Perhaps I might visit it then under those circumstances someday. Only time will tell.

The bottom line is that Mexico City is full of little gems scattered across the city for anyone to enjoy.

And I'm not just talking about archeological sites anymore.

The archeological sites mentioned are just examples of something broader about Mexico City in that you have other sites of more modern history too that have historical importance.

For example, if you go to the north of the city, you'll find this museum that I wrote about here documenting the history of trains and urbanization in that part of Mexico City.

Might not sound interesting to a lot of people but it was cool to visit.

Especially after so much time here and you grow a greater appreciation of learning about the history of so many areas in the city.

And so -- be it archaeological zones, historical neighborhoods, certain museums of more modern history or whatever else -- Mexico City has these little gems for you to enjoy.

Not all tucked away in Roma Norte, Condesa and the Centro Historico.

For the purposes of this article, we only looked at the archeological zones but there's way more than that as I said.

So, if you happen to have the time, try going out of the gringo bubble anytime to visit and learn about these other areas of historical importance.

Be it the Pre-Hispanic rocks of Iztapalapa to Milpa Alta and everything else that of historical importance that is Pre-Hispanic or earlier.