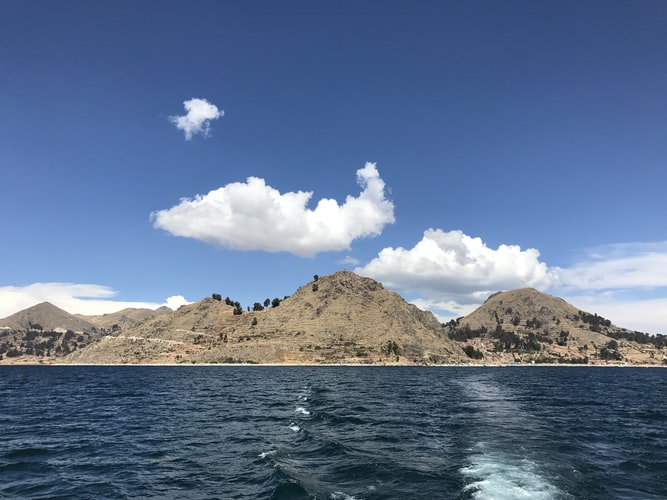 As written in this article here…

I once spent a few months in Cochabamba, Bolivia…

And for a week, I left to La Paz to enjoy some of the scenery closer to the capital city of this country.

Once I arrived, I checked into my hotel and visited a friend who runs a artisan craft shop in the La Paz.

Before going on to visit Death Road – as you can read about here.

To which after I did that…..

I then visited another popular destination in Bolivia – Lake Titicaca.

But let’s cover briefly first what is Lake Titicaca

What is Lake Titicaca?

First and foremost, Lake Titicaca is the largest lake in South America that is located in the Andes between Peru and Bolivia.

Furthermore, Lake Titicaca has a lot of cultural and historical relevance to the different indigenous pre-Columbian groups that existed a long time ago.

For example, an underwater temple believed to be created by the Tiwanaku from around 1,000 to 1,500 years ago was discovered along with a village in this area.

Lake Titicaca also had significance to the Incas (among other groups).

The islands on Lake Titicaca are also known as the following:

Either way, that’s some basic information about Lake Titicaca.

If you want to know more, check out this source here.

And let’s look briefly into my experience here.

Getting to Lake Titicaca

As said before in my article about Death Road…

One of the better ways to get better deals from a tourism agency to somewhere..

Is to do it in person first.

Walk around, check out prices.

Once you find a few agencies you like, research their reviews online and go to the one that checks out the best in person to book a spot to wherever you are going.

So anyway, I didn’t need to do that this time..

On my second day in La Paz, I visited Death Road with them.

Then after Death Road, I went to Lake Titicaca with them.

I forgot the name of the company anyway or else I would recommend them – it’s been some odd years now but I do remember that they were good.

Regardless, we get going to Lake Titicaca – they pick me up from my hotel in a van.

Once we get to our destination, I remember got to this small town.

I think it was Copacabana but I’m not sure since it’s been some odd years now.

And here’s a picture from the vehicle we were in of what I believe was Copacabana.

So you can see here, this is the small town we visited once we showed up.

Before getting on one of these boats here to eventually explore Lake Titicaca.

So for now, I will just drop here some of my initial photos of Lake Titicaca as the boat we were on was just moving around for us to enjoy the scenery.

And the scenery, as you can tell by the photos, was pretty impressive.

Plus, the other boats in the area looked pretty cool as you can see in the photos.

Either way, the first island we get to was Isla del Sol.

According to my notes from years ago, this is Isla del Sol here in some more photos…

As you can tell, there’s some infrastructure on the island obviously – some for locals and some for tourists.

With some cool animals like this one here – you see a lot of these in some touristy areas of Peru and Bolivia.

And on top of the island or at some high point, I started taking photos of Lake Titicaca as you can get some pretty good views.

As I was taking the last photo – which, as you can tell – isn’t of anyone or of anyone’s home or anything…

I noticed behind me some kid and some very old looking woman with a bent over looking bad and some indigenous clothing.

The old woman didn’t say anything to me but was looking at the kid and me.

And the little kid – who couldn’t have been older than 10 years old – came up running to me demanding money.

Not asking either – just straight up demanding – “dame dinero!”

And he goes “you are taking a photo of our property!”

Now, keep in mind, I didn’t take a photo of their property – maybe someone from before who owned one of the alpacas I took a photo of would have more right there to ask for money.

And in hindsight after some years here now in Latin America, they probably would have been OK with maybe a dollar at most in local currency.

Though sometimes maybe more – sometimes in touristy areas with lots of foreigners – the expectations that hustlers, beggars and businesses will have goes up in terms of the money they want.

Prices go up for goods and services.

Hustlers and beggars get used to getting 5 to 20 dollars or more from a tourist who feels sad for them and gives them some money.

Though, in my case, I’m not the type to really feel sad necessarily in situations like this – sometimes I will give money to little kids who are begging on the street.

It’s easier for them to get sympathy for sure than a man in his 30s asking for money.

But in this case – my first thought was that the older woman behind him coached him to demand money from me.

“oh, it’s a white guy! And when I see white, I see GREEEEEEEEEEEN!”

So you got to have self-respect – when I feel a local is treating me like an ATM machine – it annoys me sometimes.

So I simply walked off but the kid chased me for a minute or two asking for money despite the fact I never took a picture of him, the old woman or their property.

Eventually he left me alone but that together is just a small lesson for some of you who haven’t been down here -- in terms of things that might happen.

Heading Back to Copacabana

Either way, I check out the island some more, including this ancient looking site you can see here below.

Before then ultimately getting to the bottom of the island where the boat is waiting to take us back.

We started going through the waters again….

Before ultimately getting back to Copacabana....

And that was my experience at Lake Titicaca?

Would absolutely recommend – and it goes well with Death Road.

Death Road is more of a exciting experience with a lot of activity.

While Lake Titicaca is more relaxed in general.

They both go well together.

Anyway, if you have any experiences with Lake Titicaca or any questions, drop them below in the comment section.

Previous post: The Gringo Honeymoon Phase in Latin America Next post: Traversing Death Road Through the Yungas Region of Bolivia