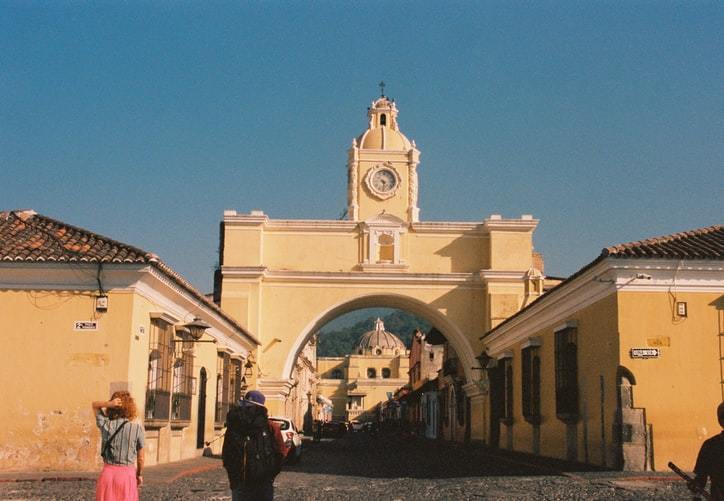 And was thinking to myself – “which country should I visit to attend a small Spanish school?”

Because there are plenty of small Spanish schools all over Latin America that have a cheap service and where you can practice Spanish with some locals.

Back then – and this was at least 7 years ago more or less – I went to Guatemala.

Because I read online basically that Guatemala has some of the cheapest schools to learn Spanish and that it is easier to understand them.

Either way, in hindsight, their accent in Guatemala definitely isn’t too difficult to understand – though back then it was a tiny bit because I was new to practicing Spanish.

But the schools were cheap for sure – I found a good one that was only like 300 bucks a month for Spanish lessons and to have a homestay that covers my food costs also.

Here’s a picture below of the school I attended.

And after that time in Guatemala – I ended up traveling around Latin America and have been to at least half of the countries down here so far.

So over all this time now..

Which countries have the easiest and hardest accents to understand?

Well, it’s better to characterize it as which regions have the hardest or easiest accents since accents can change in bigger countries like Colombia by the region of Colombia you are in for example.

Though some countries – like the DR – I have only met people from one or two cities – so some of what I will say will be country specific and others will be region specific.

So let’s get started with first the easiest accents and then the hardest ones in my experience.

In no particular order…

It’s a bit ironic Argentina is among the easiest…

Because some folks say that Argentina has one of the hardest accents to understand.

I remember when I was in Bolivia…

I had two homestays – the first homestay I ended up leaving to a second one because they were terrible basically.

The dad of the homestay was bit of a cunt with no social skills and also they never provided any food despite the fact that the money I was paying was meant to cover that.

So the NGO I was working with that set me up with them ended up changing me to a better homestay.

Either way, I remember the dad of the homestay warned me that I would have great trouble understanding Argentine people because I was going to Argentina soon.

And that their accents are very difficult.

Funny enough, once I arrived to Argentina, I found their accents to actually be much easier to understand.

The only difficulty is you will need to adjust how you pronounce the double L – ll.

Outside of that, easy!

I read before going to Colombia that supposedly Bogota has a very easy accent to understand.

In my limited time there, I remember that was actually the case.

They do tend to pronounce their words better – at least compared to other regions of Colombia.

Definitely worth a mention.

The Mexican City accent is perhaps easier for me to understand since I have been traveling around Latin America beforehand and simply find it easier because I understand Spanish much better now than when I was in Guatemala for example.

However, I do like the accent here – the exaggerated version of it anyway.

Where you hear some guy on the street talking in an exaggerated manner where every other word is “wey.”

When I was in Managua, I found the people there to be fairly easy to understand.

Despite the fact that I had very limited experience in Latin America and my Spanish was relatively crap.

But it was much easier to understand folks in Nicaragua and to have a conversation with someone.

In my experience, some of the areas with heavier indigenous demographics – such as Bolivia, Guatemala, Peru, Chiapas in Mexico, etc…

Have people that are pretty easy to understand relatively speaking – they tend to speak slower in my experience and pronounce their words better.

The only issue you will find in these areas is that – like in the case of Bolivia – sometimes they use words that have roots from local indigenous languages that seem fairly difficult to pronounce or understand.

And on that note…

Let’s talk about accents that are harder to understand for me.

Though Bogota might have folks who are easier to understand…

I often found people in the Caribbean Coast of Colombia to be fairly difficult to understand.

After a while, you will get used to it..

But I do remember after spending months in Barranquilla…

I ended up taking a trip to Pereira, Colombia and also Patagonia of Chile and Argentina.

Which you can read about my Patagonia trip here..

Either way, for both trips..

I found it so much easier to understand what the hell people were saying.

But like I said, you get used to it after some months in a place like Barranquilla but it does take more work to understand people – especially if you have limited Spanish experience.

Also, speaking of coasts of Colombia…

I also heard that the Pacific Coast around Cali has a difficult accent as well – I haven’t been there yet but I’ve heard so.

Similar to the Caribbean Coast of Colombia, the DR has a relatively difficult accent to understand.

Though I found the accent in the DR to be even more difficult than the one in Barranquilla for example.

And the DR itself is in the Caribbean area of Latin America anyway.

Though there is something else to mention here…

Generally speaking, this is somewhat of a thing that other travelers down here like myself have seem to noticed.

I’m not entirely sure if all Caribbean areas have more difficult accents to understand.

But from what I’ve heard from other travelers to places like Cuba, it apparently is the case.

I am familiar a tiny bit with some folks from Puerto Rico that I have met and noticed something similar.

The only good thing I have noticed about these accents, like with folks from the DR or Quilla, is that they seem to integrate more English words into their vocabulary.

More Spanglish to a degree.

Which I like to be honest – seems kinda cool to mix up the two.

But in general, you might notice that accents in some of these places around the Caribbean area to be a little more difficult if you are new to Spanish.

Though that is not necessarily a bad thing…

There is one benefit, in my experience, to practicing Spanish in an area like Barranquilla.

You will probably understand most Spanish speaking folks.

And when you leave those areas – and go to a place like Bogota or Mexico City – you will notice just how much easier it is to understand everyone.

That’s because you were playing Spanish on Hard Mode and everyone else is easier to understand.

Either way, that’s just my opinion.

Got any experiences or questions yourself regarding the topic of this article?