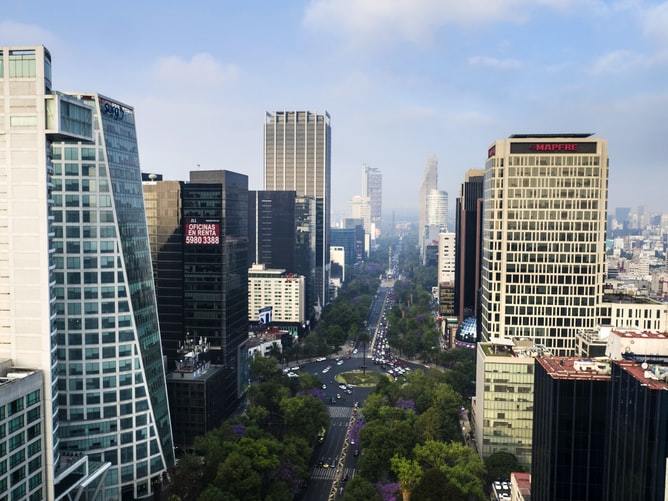 “What an amazing day” I thought

Walking through the crowded streets of Mexico City…

Having just exited Metro Insurgentes, I could feel the warmth of the sun shining down on me.

And I responded with a wave “buen dia, Sol!”

The birds were chirping…

There weren’t any homeless people shitting in front of me…

Buildings started to collapse all around me.

And wreckage started smashing down on innocent people everywhere.

And a meth addicted homeless person in the distance started laughing….

And there were dead bodies everywhere all around me.

Not exactly that dramatic.

Though when I left for the US a few months afterwards to visit family for Thanksgiving..

I was often asked “how was that earthquake?”

And that’s usually the story I like to give – just because it sounds cooler than “being shaken around.”

But let’s get to what actually happened that day…

It was my birthday.

Now, that isn’t bullshit – my birthday actually is September 19.

Fortunately, I already celebrated my birthday the weekend prior with this Peruvian chick.

But, given it was my birthday, I felt I might as well enjoy some of it at Starbucks.

No, no, not Cielito – Starbucks.

Got to support these American businesses – some of us don’t forget where we came from!

So I step outside of my apartment in La Roma and pass by Metro Insurgentes..

To the other side and walking towards the direction of where the Angel of Independence statue is.

But I stop and enter at this Starbucks that is closer to Metro Insurgentes.

I give them my card and more or less about 40 pesos (2 bucks) for a large black ice tea.

The ground started moving and I thought to myself “earthquake?”

And the dude at the cash register said to himself “temblor?”

And this overweight Mexican chick near the long table in the building yelled “TEMBLOR!!!”

Or something along those lines. She yelled something.

And immediately we all run out of the building.

The Specific Starbucks Where I Was

And I remember thinking “fuck, I aint getting my goddamn tea.”

But I paid for it!

Ok, ok, that might not seem important in the moment but it is to me.

I just paid and didn’t get my fucking tea.

Anyway, we all go outside…

Here’s a picture of the street from Google Maps of where we were (sorry for the poor photo quality, I'm not sure how to take a screenshot on my laptop so I took this photo with my phone from using Google Maps on my laptop).

And I was basically standing by this tree here.

I remember seeing some metal ladder fall down and some people were going down it from a building next to the Starbucks.

Then there was also some other building behind Starbucks from what I saw that took a bit of damage.

And in the distance, there was this tall ass building that had like a smaller looking building on top of it that was on the verge of collapse from the looks of it.

Some months later, I remember they closed off the specific section of this street where that building was located.

In case it falls or something, I suppose.

Which basically killed a bunch of businesses in that area.

A bit unfortunate but understandable – though my favorite pizza place at the time never recovered.

Including a handful of bars in this area that I often went to.

At any rate, the ground is shaking.

And, as in typical in all of the earthquakes I have seen in Mexico…

All the women start crying while the men start calming them down.

Not to play on stereotypes but it’s true.

Even when earthquake alarms go off but no earthquake is felt, all the women start shaking and crying for some reason.

Chica, the fun hasn’t even started yet.

Anyway, there’s a shit ton of people in the street from what I remember.

And the earthquake stops.

At this point, I walk behind Starbucks to see some damage over there and just checking stuff out.

Then this social worker comes onto the street and starts yelling through some microphone that we all need to walk to the left because “this area is dangerous and another earthquake or after effects could harm us.”

And, in my guestimate, probably 5% of the people took him for his word at it.

Again, apologies for the crappy photo here. I will probably replace this photo at a later point whenever I get around to walking by this area of Mexico City again to take an actual photo of where it was.

The rest just stayed there.

I found it kinda funny in a way to watch him warn everyone and basically nobody is taking him seriously.

Well, I end up walking to the left where supposedly it is safer.

And I see quite a few buildings damaged with some wreckage on the ground here and there.

I hang out there for a little bit longer and then thought “why the hell am I still hanging around here?”

So I walk back to where I was before to where the social worker is still yelling “everyone, get out of here!”

And I decide to walk towards Metro Insurgentes where I cross by it and to the other side to where I walk towards my place.

Some small little place on Durango street, if I remember right.

And so I’m walking and there’s hundreds of people walking outside in the middle of the street.

I get inside my apartment and happy to see nothing is damaged.

At least none of my stuff.

I see a friend of mine is waiting for me – Angie.

We had been basically hookup and drinking buddies for a little bit by this point.

She had walked from her place of employment to my apartment basically since the metro wasn’t working, I’m pretty sure.

Which, if I remember right, I think she worked in Polanco area but that would be one hell of a walk, I think.

But I did spend about maybe 2 hours after the earthquake happened outside.

Either way, she walked to my place from whatever neighborhood and was happy to see I was not hurt.

If I remember right, she had a small gift for me for my birthday to give when she saw me -- this book below.

Afterwards, we hang out some more and she goes back to her place from what I remember.

I reach out to my family to let them know I am good.

And later that night, I am walking outside to get some food.

I had no food in the fridge or anything and was looking for hopefully some restaurant that would be open.

And the streets were pretty dark also.

There was some vehicle I saw that was collecting supplies to give as relief to the victims.

And I decide that I would be better off buying junk food at Oxxo since there is nothing else to buy.

Now it was either an Oxxo or a 7-11 but I manage to buy basically some Pringles and other types of chips with a bunch of drinks.

Guess this is dinner tonight.

The next morning, I remember the landlord telling everyone in the building that we all had to leave.

Some inspections were needed to be done to verify that the building is still safe for living in.

And the landlord had a separate building with some rooms that we could sleep in.

Well, I decide to take my stuff and Angie allowed me to stay at her place for the few days or however long it was.

And, for whatever reason, we decided not to take an Uber and basically moved my suitcases around the metro, if I remember right.

Not entirely confident on that though because I’m not sure if the metro would have been operational just yet the day or two after.

But that’s what I remember.

Thankfully, the building was still safe and we were all able to return quickly enough.

And, over the course of my time in Mexico, I have experienced other earthquakes here but nothing like that one.

That earthquake was the strongest one I ever felt anywhere.

In the end, about 370 people died, more than 6000 were injured and more than 40 buildings collapsed.

All the while closing many businesses in the area that I used to visit.

In my time here in Mexico City of about 3 years, there have been plenty of businesses that have gone under that I used to visit.

And that earthquake really did a number on plenty of them.

Finally, it happened on the day of the 1985 Mexico City earthquake, which was much more destructive.

All around, it was a very interesting experience.

And thankfully, I haven’t lost any other cups of tea from Starbucks due to any other earthquakes either.

Joking aside, if you have any of your own experiences regarding this day, let me know below in the comment section.