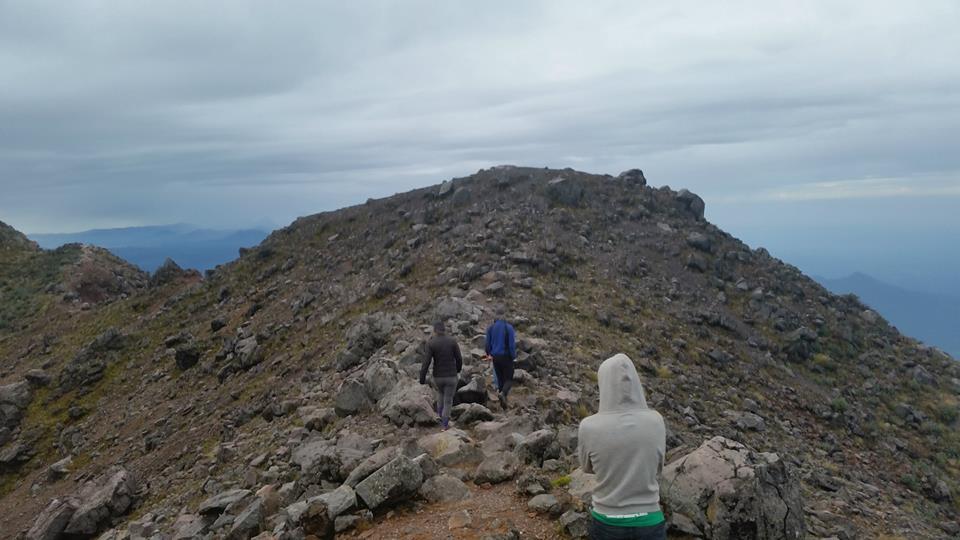 Being originally from Iowa…

We don’t have a whole lot of mountains and volcanoes to go hiking obviously as some other areas of the world.

So, naturally, I never had much of an interest in doing such things.

However, almost a decade ago, I traveled to a small city in Guatemala called Quetzaltenango.

The purpose of my trip was to basically work on an academic task a local NGO in the area.

And I was also interested in improving my Spanish a bit so I also went to a Spanish school as you can see below.

It was a small little school where basically you work with different Spanish instructors on a one-on-one basis.

But during my time in Quetzaltenango…

While it was a nice little city that has its own charm.

It can get a bit boring to be honest.

Especially after a few months of living there.

So I figured that, since this was one of my earliest travels outside the US at the time…

I might as well appreciate the time I have and go explore the country a bit.

But I was limited on funds so going to the club every weekend and making it rain with the chicas en minifalda was not in the budget.

But that’s cool – we don’t need no stinkin clubs when we got mountains and volcanoes!

And that’s how I got started in my interest in hiking in Latin America.

Something that has stuck to me to this day.

The Start of Our Journey

As you can see in the photo above, this is where the journey started to hiking this volcano.

My first hike of any mountain or volcano ever.

The trip was done with a British couple and another British guy who was there friend.

Along with a local Guatemalan guide to help us get to the top.

If I remember right, I think the trip took more than one day to complete both ways but I could be wrong.

Anyway, Tajumulco Volcano is apparently the highest mountain of all of Central America at 4,202 meters (13,786 feet) according to the superior academic source Wikipedia here.

And is part of the mountain range of Sierra Madre de de Chiapas.

Here’s a video of it shot by someone else on Youtube down below here that you can see of it.

But, don’t worry, we have plenty of photos also!

At any rate, we start hiking the volcano and I started to get a little bit nervous about being high up.

Mostly because I used to be a little bit scared of heights and I could see the drop over the cliff pretty well.

But it wasn’t too intimidating.

It was definitely worth it given just how beautiful the countryside of Guatemala really is.

Definitely one of the better aspects of Guatemala is the beauty of the countryside in my opinion.

Anyway, we end up stopping real quick around this area here below if I remember right to have some sandwiches.

Before continuing the journey…

And stopping at this place here below to basically camp out and sleep for the night in some tents.

And afterwards, we woke up at about 5 AM more or less to finish the remainder of the hike up the volcano.

Now the remainder of the hike was relatively a little more challenging than the other parts of this hike.

Mostly because, up to this point, the ground we were walking on was pretty stable seeming.

But when we began to finish the hike up the volcano, the ground was a bit less stable and a lot more rocky.

And, if I remember right, much steeper at this point.

It definitely was a bit more challenging at this point.

But once we made it to the top….

Tajumulco Volcano  offered just as many stunning views of Guatemala on the top as all the other things I had seen up to this point.

Such as this rainbow we saw below here…

At any rate, we also had this random stray dog followed us up as well.

A very friendly dog and we offered him some food along the way.

Which is probably why he stayed along.

And at the top of the volcano, one other thing I enjoyed about hiking aside from the views…

Is not only the work out you get from it.

But also the sense of accomplishment.

So at the top of the volcano, we had plenty of walking space.

Which offered even more views of the surrounding area as you can see here.

At any rate, it was time to get going and head back to Quetzaltenango.

The trip down was much easier than the trip up obviously.

And offered plenty of nice views to appreciate again as you can see here.

Finally, we get back to the bottom of the volcano pretty quickly within the same day.

And at the bottom, another dog approached us.

I decided to offer this one a small cracker as well that I bought at some small store that was across the road from what I remember.

The dog took a nasty bite though and almost bit my hand.

If I remember right, this was close to the end of the trip waiting for our van.

So, note to those curious about feeding stray dogs – just throw the food onto the ground obviously.

Either way, the van arrived on time to pick us up and off we were.

Reflection On My Time to Tajumulco Volcano

The trip was definitely worth it.

And ultimately was what got me started into hiking in general.

Though I am no professional hiking expert by any means…

It is something I definitely enjoy whenever I have the opportunity.

Unfortunately, certain cities in Latin America do not have an abundance of mountains or volcanoes nearby like Buenos Aires for example.

But then you have other countries like Peru, Bolivia, Chile, Colombia or Guatemala that obviously have an overabundance of mountains or volcanoes to hike.

Though, to be fair to Argentina, they also have plenty of amazing mountains to hike – some of the best in Latin America in my opinion – in other areas of the country.

But overall the fun of hiking any mountain or volcano comes from multiple benefits.

Such as the nice little work out it gives you.

To the amazing scenery in the countryside you can see.

The feeling of accomplishment.

And also the ability to check out rural towns or even villages that are sometimes located near these mountains or volcanoes in Latin America.

All of which gives you more of a real impression of the country outside the large cities and touristy hotspots.

Nothing wrong with big cities – I love them for what they can offer.

But being from a small town myself..

I greatly enjoy checking out communities not often talked about in Latin America.

Where you can find some really nice people and get a deeper understanding of the country you are experiencing.

And so those are all the usual benefits I find in hiking.

To exploring the countryside and its natural beauty and small towns to everything else I mentioned.

Now if you have any hiking experience yourself in Latin America…

Let me know below!

I don’t know every hiking spot in Latin America obviously and maybe there’s a spot out there worth checking out that I don’t know about!

Previous post: The Gringo Super Star Treatment of Latin America Next post: My Most Difficult Hike in Guatemala: Santiaguito Volcano