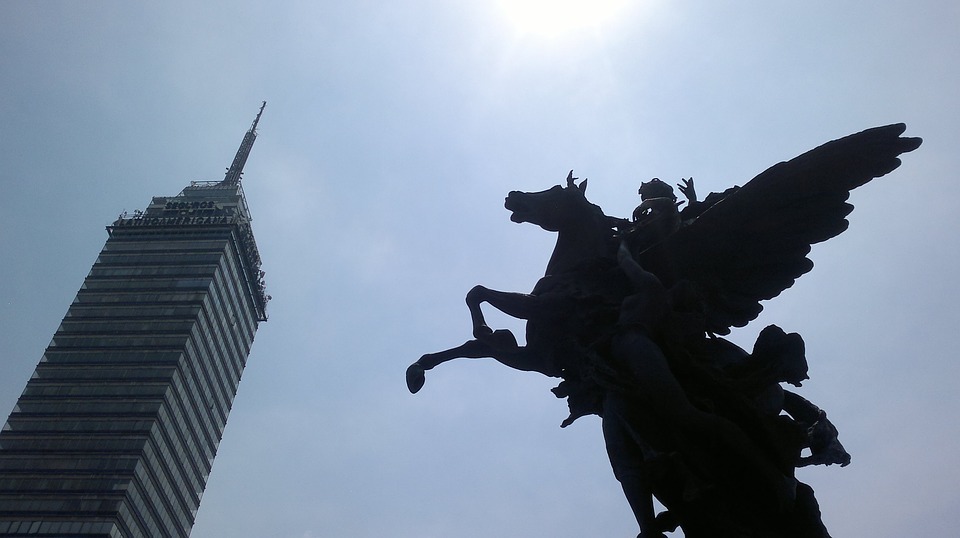 About 10 days ago, I moved out of my former apartment in Copilco area of Mexico City and moved northward to another area called Lindavista.

With all my stuff placed inside an UBER, we began the journey that lasted about an hour to get to my new apartment in which you can read more about that trip here.

Something I left out of the story though were the few examples I saw of just reckless or bad driving in general.

As we left Copilco area, the driver got onto some very busy road.

As we were making small talk about he spent time in the US, I saw one vehicle ahead of us nearly causing an accident when changing lanes abruptly.

By the time we were passing through Centro Historico area of the city, the UBER driver decided to cut around traffic by driving onto the lane that is reserved for bikers only.

Something that plenty of drivers in Mexico City do despite it being against the rules.

I believe this video here shows well the conflict between drivers and bikers well.

Not too long later, I believe we were passing by Buenavista area if I remember right.

There was some decent sized mall nearby that looked familiar so I think it was Buenavista area but I could be mistaken.

In which we were waiting for the red light to turn green and some motorcycle dude decided to use the sidewalk going the opposite direction of where we were going.

Now, to be fair, none of that was really eye opening to me except for the vehicle that almost caused an accident not too far ahead of us.

When that happened, the driver had to slow down considerably for a second (among a few other vehicles) and I did wonder if we were legit going to be in an accident.

Which would be a major pain in the ass given all the shit I have in this vehicle.

Well, the driving onto the biker lane to the motorcycle dude wasn’t surprising at all.

Among other traffic violations that you see in Mexico City which are not very surprising and you get used to it.

Truth be told, your average driver in Mexico City isn’t the best person to trust behind the wheel in my opinion.

Of course, if we were to compare your average person from Mexico City to other places I’ve been to in Latin America…

Well, it could be worse, couldn’t it?

At least Mexico City isn’t full of drivers from Barranquilla.

The shit I’ve seen people do over was much worse to the point that, whenever I got into a taxi, I would think to myself “is this the day I die?” due to my lack of confidence in their driving abilities.

Regardless, it is a question, isn’t it?

Why is it that folks here in Mexico City leave much to be desired when it comes to their driving abilities?

Like this chick in this video here who almost caused an accident with a motorcycle dude and then crashed into a taxi in Mexico City.

Well, if we are being fair, it should be mentioned how Mexico City is very heavily congested.

Add more vehicles to the mix and you have more potential for accidents obviously.

And today I might have come across at least a piece of the puzzle as to why it seems drivers down here are not always as good as they should be.

Just a few odd hours ago, I was eating lunch when I got a notification on Facebook about a new comment posted.

Someone started a conversation describing how they got denied a license in Mexico because the lady behind the counter doubted his Spanish ability.

To be fair, I have no idea how good his Spanish really is. It very well might be shit.

Though, on the flip side, I did consider the possibility that the lady was simply being an ignorant little xenophobic cunt who can’t believe, even with evidence in front of her, that a foreigner can handle Spanish well enough.

I’ve seen those also down here!

Anyway, regardless of his Spanish ability, someone mentioned in the comment section how “you don’t need to prove you can drive to get a license in Mexico.”

And, thankfully for me, someone asked for proof of that.

To which the conversation carried forward as you can see here.

As you can see, someone posted a screenshot of the screen where they process their license application in which it says in Spanish “Estas Seguro que no quieres tomar el curso de conocimiento de transito antes de obtener tu licencia?”

In which, as the screenshot shows, it is asking if you are sure that you don’t want to take a driving class before getting the license.

The dude in question apparently is sure that he doesn’t want a test.

After that comment, some chick mentioned how she was only asked if she wears glasses or not and how she got the license after handing over photos and money.

And then a third chick did clarify that at least younger folks from 15 to 17 do need to prove at least some knowledge of driving.

Sure looks easy compared to the shit I had to deal with to get a license!

In my small town in Iowa, I had to take some computer test a few times because I kept failing the damn thing.

In my defence, the questions were stupid!

And then, after passing the test after only a million attempts, I had to take driving classes.

In which I understood why the test was initially difficult as I nearly crashed the vehicle on the first day into a wall.

I wasn’t paying attention and the driver reached over the pull the wheel to force it to turn while my friend was having a heart attack in the backseat.

So maybe I shouldn’t be complaining about how Mexicans can’t drive?

Still, in my defence, I never did cause an accident in all my years of driving outside the one time I backed into the neighbor’s truck late at night.

He deserved it though.

Anyway, I initially had doubts about Mexico City not requiring a driving test so I looked a little more into it myself!

So What Do the Sources Say?

Well, I came across contradicting news reports on this one.

According to this source here, there was another mayor of the city in 2014, known as Miguel Angel Mancera, who signed an order requiring a test on a driver’s eyesight, their driving abilities and a “theory test.”

Then there was a “Mobility Law” signed in July of 2014 but it was “delayed before eventually being replaced with a 2017 Mobility Law Regulation which had no requirements for a driving test.”

Because, according to this 2017 article from Mexico News Daily, apparently it was believed that “drivers will be tested in CDMX next year.”

With that previously mentioned law was passed around that time, this second article says “the Mexico City government abolished the driving exams in September without offering any explanation. Now it says that a new, extended licensing scheme will go into effect early next year.”

So did that happen?

Well, according to a follow up article here from Mexico News Daily on September 22, 2021 (literally just 2 days ago), Mexico was apparently “ranked the easiest country in the world to obtain a driver’s license.”

Now, to be fair, the article expands on how “the granting of licenses is regulated at the state level and so requirements can vary widely.”

Still, the country as a whole ranked 8.48 out of 10 in regards to how easy it is to get a drivers license.

It goes on to saying how “in a large portion of the country, you do not legally have to take a practical test to get a license, just a theory test and moreover, prior to 2018 there was no test at all. Another reason is that you can legally drive at 15 in Mexico which is younger than the majority of countries.”

While not every area of Mexico even requires a theory test, it should be said that some states do require an actual practical exam.

In Mexico City? The article says that “there is no examination process” despite how congested Mexico City is.

In which the fee for a three year license is only 871 pesos or 44 bucks and doesn’t demand any “knowledge, experience or proficiency.”

Finally, we have this 2014 article from the BBC in which someone details how the process back then for how they got a drivers license in Mexico city.

In which, back then, the foreigner in question only had to produce “a copy of your passport, your resident’s card and a recent utility bill” while he also had to fill out a form and give pay 677 pesos or what would be considered 50 bucks in 2014.

Check out that article here for those curious about that personal experience by that author.

As I implied before, I don’t think the requirements to get a license is the only explanation for the number of accidents in Mexico City.

As I said, the congestion of the city obviously contributes to it also.

In which, at least in my opinion, it’s not just the requirements to get a license that matters but also the enforcement of said traffic rules.

As I said, Mexico City isn’t perfect with that as you’ll see down here many times over.

But Mexico City isn’t the worst I’ve seen in Latin America when it comes to a complete disregard for the rules.

In which, as I said before, the Colombian city of Barranquilla was by far the most impressionable city in regards to people not giving a damn about traffic rules.

Where you had drivers consistently speeding past red lights or stop signs while honking to indicate “FUCK YOU I’M NOT STOPPING.”

Only takes two egomaniacs to do that at the same time and place to cause a serious accident.

And, beyond all of that, obviously good road infrastructure is necessary too.

Back when I lived in Barranquilla, I remember the roads not being as nice but I do know a guy who lives there now and he told me it’s considerably improved compared to when I was last there.

But your mileage does vary greatly in regards to the rest of Mexico.

Still, above all else, obviously the lack of usual requirements to get a drivers license down here is clearly a contribution to the bad driving skills you see consistently in Mexico City.

Which is the main message to be driven home here.

All around, it was surprising to me to hear that the requirements are so weak.

On one hand, maybe I shouldn’t be surprised given how often I see things being done so loosely down here.

On the flip side, I never drove a vehicle down here so I have less exposure to the process to get a license anywhere in Latin America.

Mexico City or anywhere else.

Anyway, if you have any comments yourself, drop them below in the comment section.

Previous post: The Gringo Delivery Service to Friends in Latin America Next post: The Disbelief at the Spanish Speaking Gringo