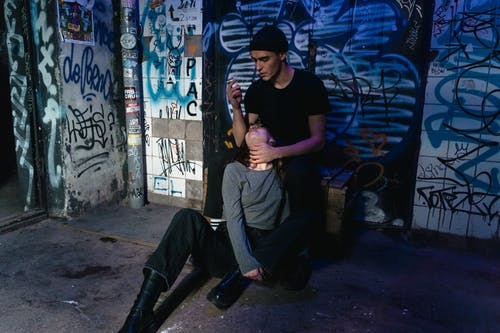 Back when I was living in Xela, Guatemala, I would often go to this café in the touristy area to sit down and relax.

While there, there happened to be another foreigner named Jeffrey who was from the US.

Now, to keep it short, Jefrrey was basically a sex tourist.

Which is funny to think about because he chose Guatemala as his place to be an alcoholic sex tourist.

Perhaps Panama City to a degree…

Or they’ll go to Cuba, the DR, Brazil or Colombia.

If they like white Latinas, maybe Argentina but you can find those in Colombia as well.

Suffice to say, Guatemala isn’t very well known as being a “sex tourist” place in large part because foreign men tend to find the average girl there to be really ugly.

Anyway, Jeffrey was as stereotypical as you can get when it comes to being a sex tourist.

And he was divorced when he lived in the US.

So, in short, he hasn’t had the best dating success in life.

Though not to judge him too harshly there…

Lots of people get divorced!

On the other hand, he probably did have money because, in his words, he was a dentist back home.

Granted, he also claimed to work for Intelligence in the US so he was sometimes seemingly full of shit.

Still, that’s part of the beauty of life in Latin America as an expat – you can reinvent yourself and be whatever you want!

Anyway, Jeffrey was, by most people’s definitions, the stereotypical “loser back home.”

And, back home, they were somehow “losers” so they had to escape that.

The loser back home can be the stereotypical young male in his 20s who wanted to avoid the crap job and dating situation..

To the recently divorced guy who is old.

Anyway, it’s a bit of a stereotype but there is some smoke behind the fire because some of these gringos do exist down here for sure.

Having said that, there’s been a question that should be brought up – how many of these gringos were truly “losers back home” or how many of them simply became losers after living down here long enough?

Because let’s take Jeffrey for example..

I wouldn’t call him a loser for having been divorced. That’s quite common these days.

And let’s accept the possibility that he was a dentist.

In that case, he must’ve had decent money!

And, all around, perhaps he was a well-contributing member of society.

But, once he moved down here, he became a bit of a scumbag perhaps.

Where the gringo in question was, for the most part, a decent person back home but became shit when they began living in Latin America as an expat.

That’s a little bit of nuance that seems to evade people’s thinking.

Some folks think all expats are “losers back home” when that’s not true at all.

And others, who are a little more nuanced, think that “some expats” were losers back home.

But I haven’t met too many who consider the possibility that the expat wasn’t a loser back home but because a loser while living down here.

So not so much a “loser back home” but a “loser in Latin America.”

An LBH to a LLA if we have to stick to acronyms.

Of course, to give credit, I only recently heard the specific term “loser back home” when listening to expat videos made about life in South Korea, Japan, Thailand, China, etc.

It’s not a term I have heard applied to expats living in Latin America but the idea behind it has been applied to us where people make the same accusation that we are “losers who couldn’t make it work back home.”

That’s usually how the phrase seems to go – add a “who couldn’t make it work” into it and now you are talking about the ones in Latin America.

A more sophisticated phrase for us south of the border!

Back to the point anyway, let’s discuss why an expat might become a loser in Latin America despite not having been much of one back home.

First, let’s define what the loser actually is.

I’ll keep it simple and say that the loser down here is the expat who, after enough time down here, can’t get his shit together on anything.

Nobody is perfect to be fair.

And I don’t expect any particular aspiring expat to be a loser if they are in their first or second year down here and still making 500 bucks a month.

They’re still getting their feet wet so to speak.

Furthermore, I don’t really shame the foreigner if he wants to engage in vices too much as long as he has the rest of his life in order.

Say a foreigner who goes to a whore house once in a while or does cocaine or whatever it might be.

And, in the first year that this foreigner lives down here, it’s more understandable for him to engage in the vices a little more often than normal.

He might be in that honeymoon phase or whatever and is simply having an adventure.

The “problem foreigners” or the “loser” so to speak is the one who, despite a decade living down here, still doesn’t have his shit together.

The one who ends up every weekend vomiting in public with only 100 dollars to his name.

Literally only a 100 dollars.

Said gringo literally would not be able to afford a plane ticket back home.

And, truthfully, that’s probably a good measure of if a gringo down here is a loser or not.

Can he afford a plane ticket back home?

Granted, you could argue that standard is quite low since a plane ticket probably isn’t going to be more than 1,300 bucks if he’s flying in from Argentina in worst case scenario…

One for himself and one for his favorite prostitute to come to America!

If, on the other hand, said foreigner has his finances in place with a reasonable income…

I’d forgive whatever vices he has as long as is presentable and isn’t living paycheck to paycheck.

Because, as I said, nobody is perfect.

So that’s where I’d define that – the loser down here is the one who literally has nothing in order despite a decade down here being in his 40s maybe always making a mess of himself and never having enough money for two plane tickets back home.

Having said that, why do I think that expats can become losers down here despite not having been losers back home?

The Gringo Rotting Away

First, it can be difficult to get your shit together while down here long term if you don’t have social security or retirement for some gringos.

Especially from a financial aspect.

If you are trying to figure out how to make money online, it can take a bit of trial and error really.

Some gringos never figure out or try smartly enough to make decent money.

Consequently, they end up at 40 years old with no real money in the bank account.

Second, some gringos see the behavior of the locals and think they can get away with similar behavior.

Simply put, they behave like those they have experience seeing.

Third, it’s easy, as I wrote elsewhere, to get a little bit of an addiction to things like sex, drugs, liquor, etc. Some gringos never get a hang of that. Perhaps it’s because of boredom with nothing else to do, coping with the past or whatever really.

On top of that, some things simply become more “normalized” the longer you stay down here.

Things that wouldn’t be as acceptable back home.

Fourth, sometimes you might notice a gringo who is constantly on the move from one country to the next.

In that situation, I feel like it can be easy for the gringo to keep reinventing himself.

Let’s say he gets into trouble in Costa Rica.

Then he moves to Colombia…

Nobody knows him in Colombia.

He hasn’t build up a bad reputation among the locals just yet.

And without enough fellow gringos surrounding him, he might not feel as much social pressure to conform to better behavior.

Fifth, some gringos, as mentioned elsewhere, can become very jaded with life down here.

It’s the difference you see between the wide-eyed gringo who is in the honeymoon phase to the one who sees shit everywhere he looks down here.

Consequently, he might not have as much respect for the local customs or people and behave badly.

Especially if he is jaded after having been fucked over one too many times by the locals or whatever the issue is that has made him more jaded.

Sixth, the lack of responsibilities that some gringos benefit from down here (no house, no kids, no wife, etc) can make a life of degeneracy a bit easier.

So let’s go back to Jeffrey.

Jeffrey might have been a dentist in the US.

Not the type to run around drunk drinking liquor out of a container in a café like he often would when I saw him.

And definitely not throwing random comments out there for everyone to hear about how “he’d like to fuck that cute little Japanese gal over there in the ass.”

Before chuckling along to himself and having another sip like I wrote about him here.

Perhaps because, back home, he wouldn’t feel as confident to make such a loud comment knowing that everyone in the café would speak English in the US.

Whereas here, in Guatemala, he feels confident enough that not enough people would understand him.

Or maybe he doesn’t give a fuck if any of them do because “they’re little Guatemalans.”

At any rate, Jeffrey might’ve been a respectable enough character back home.

Not a loser necessarily.

But now that he is down here…

Well, he doesn’t have a wife or kids down here to be responsible for in the community.

No responsibilities at all really.

Has a nice 1,200 social security check or whatever to keep him financially afloat just enough to not worry about expenses.

Is quite board likely with nothing to do so a lot of drinking helps the days go by faster.

Plus, having been divorced, drinking can help cope with that if needed.

And no social pressure by other gringos to “act more normal” in public.

In a community where few people know him.

Similar to being a tough guy on the internet saying shit you wouldn’t to someone’s face because you feel there would be less consequences for your words or behavior.

Of course, it can be said that not all gringos are like that.

As I've written here, it’s somewhat of a stereotype by angry locals of us gringos to be like this down here.

Which I find funny at times because the same angry locals likely have vices themselves or are not perfect at the very least.

Still, this is all simply meant to recognize that a “rotting away” effect can happen on a gringo.

Who might’ve not been a loser back home but is slowly degrading into one down here.

And so that’s the topic – the degrading of the gringo and how not every “loser gringo” was a loser back home but became one down here due to his reaction to the conditions he finds himself in.

Previous post: The Blatant Lying of Mexico City Landlords Next post: The Different Levels of Self-Discipline in Latin America