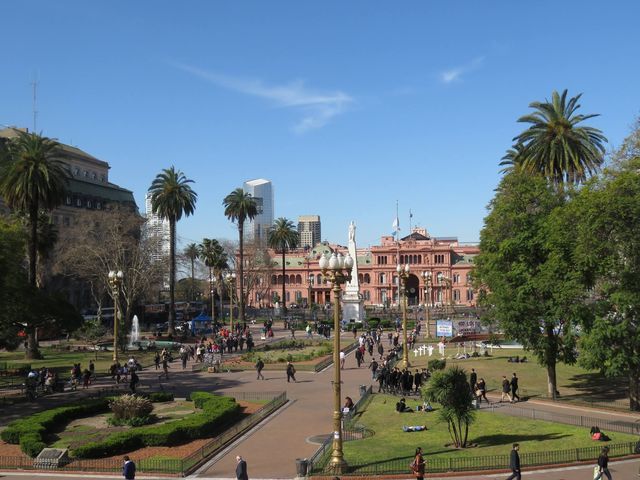 Sitting in a plane in the international airport in La Paz, Bolivia….

I was ready for my flight to Buenos Aires, Argentina.

And just returned from a quick trip to Peru as you can read here.

Anyway, I was sitting in the middle row between two Argentine chicks who were cute and seemed to know each other.

As I got to Buenos Aires, it was interesting to see how much nicer looking the city was relative to La Paz.

I showed up anyway to my hotel for the night before ultimately getting to enjoy what the city itself has to offer.

Though, to be serious, the air quality in Buenos Aires was definitely better than other Latin cities i had been to.

So I guess the name isn’t misleading.

Anyway, that’s what this article is about.

Just going over all of the cool things I saw in the city, my brief thoughts on those places and plenty of photos that I took.

After getting set up in the hotel, I decided to take a walk outside.

I first went to a ice cream shop if I remember right.

Well, I forgot that in Argentina, the word “galleta” is pronounced differently.

Anyway, I struggled at first trying to order it as the guy behind the counter had trouble understanding “galleta” until I remembered that it is pronounced differently there.

“Gasheta” is what I said next as I corrected myself.

“Ohhhhh, gasheta! Haha haha!” he laughs out as he finally understands what I want and then that was it.

Once outside again, I remember being impressed by how big the city was.

By then, it was the biggest city that I had been to by this point.

Well, much bigger than any city I had been to in Latin America by that point anyhow.

Here’s some photos of the streets from what I saw below.

As I was walking around, I also noticed some of the street performances as well and other cultural sightings.

Below here you can see some photos I took of some performances.

The first two photos are of some band and then some photos of tango being danced to in the street by some performers.

That is quite common from what I saw in Buenos Aires – people performing the tango for money.

I also went to some jazz bar from what I remember and really enjoyed the live performance.

Relative to other cities in Latin America, Buenos Aires is arguably one of the better ones for jazz music if you like jazz music like I do.

To be honest, I’m not really that much into museums.

They’re OK but I often find them fairly boring.

Sometimes though you visit a cool one like one I saw in Paris years ago that had the Mona Lisa.

Pretty cool to see that in person.

Otherwise, museums that have to deal with historical events and not necessarily art are at least more interesting as I like history.

Well, there were some museums anyway that seemed cool in Buenos Aires.

Definitely the museums in Buenos Aires seem to be some of the best you can find in Latin America from what I have seen.

Enjoy the photos below of some what I saw at the National Museum of Fine Arts in Buenos Aires.

As you can see in the photos below, I went to some cemetery in Buenos Aires that has the grave of Eva Peron.

For those who don’t know, Eva Peron was an important historical figure in Argentine history and wife of Juan Peron.

You can look more into these figures here and here

Anyway, it was kinda cool to visit her grave.

A lot of people in Argentina love Eva a lot.

I remember the home stay I stayed at in Buenos Aires had a single woman living there who had basically a shrine for Eva Peron in one of her rooms.

Just a ton of photos and some memorabilia about Eva as well.

Here you are going to find a shit ton of photos on parks.

Out of all of the sights in Buenos Aires, I thought the parks were the best overall.

I took the first set of photos below here at some Japanese Garden there.

I remember going there with an Argentine chick that I hung out for a tiny bit named Tami that you can read about here.

Anyway, Argentina has other green spaces as well with plenty of living things to see also as you can see in the photos below here of the Botanical Garden of Buenos Aires.

I went to Barrio Chino a few times in Buenos Aires.

Once with Tami if I remember right and also one time with an Argentine chick named Debi.

You can see the photos of this Chinese neighborhood below here.

Some good food can be found here also – there was one restaurant I liked and I would put the name of it here if I could remember its name.

Either way, you can definitely find some good food there also.

But I did stumble upon one that I went to that seemed kinda cool.

Here’s some photos of it below here.

Here’s another cool park in Buenos Aires that is dedicated to the United Nations.

Looked pretty interesting so I checked it out.

Enjoy the photos below here of it.

Here’s some cool photos below of some port area of Buenos Aires.

These were taken on my last day before the day of my flight out of the country in Buenos Aires.

I was basically running around the city with a little check list of things to visit before I had to leave.

Plus I saw some people dance to the tango again in the street as you can see in the photos below here.

While editing this article, I came across some photos of what looks like a zoo that I happened to visit in Buenos Aires.

I didn't remember visiting this place until I saw the photos.

I do remember there being some protest against the zoo outside of the entrance to it as I walked in.

Funny how memory comes back so easily sometimes.

Enjoy the photos below here.

In these photos below here….

I forgot what these parks were called but I happened to stop by them as I was walking around the city on my last day visiting different spots.

And here’s a cat I saw below chilling as I was walking around.

Anyway, hope you enjoyed these photos!

The point of this article is to just illustrate how nice Buenos Aires can be with some of its attractions.

It is a nice looking city overall despite the shit ton of dog shit in the sidewalks.

Anyway, it’s one of the nicer cities I have come across in Latin America.

With the higher price tag for airfare and the time to get there as well.

Anyway, definitely worth a visit anyway if you are in that part of the world.

Here’s a last photo of Buenos Aires near the presidential house.

Got any comments or questions? Drop them below in the comment section.

Anyway, here's a video below of Buenos Aires.