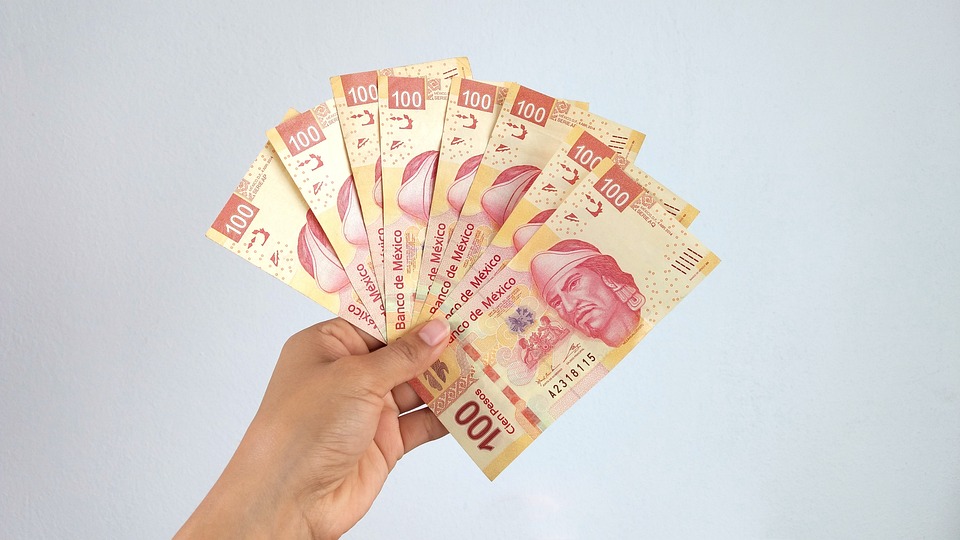 Compared to any other part of Mexico City, Iztapalapa was the most consistent in giving me shit bills.

As you can read here, I even was given a fake bill at one time when buying some micheladas.

It was another incident though that confirmed my suspicions that Iztapalapa loves giving people bad bills.

And where I suppose we could learn a lesson from this for those who find themselves in this specific type of situation.

While living in Colonia El Manto of Iztapalapa, I was walking over to the Soriana near Metro UAM to withdraw some cash.

And there was an ATM machine inside the Soriana.

After withdrawing the money, I walk back to my apartment.

Along the way, I stop by this place selling empanadas.

Which is quite nice because you don't see too many places in Mexico City selling empanadas.

Anyway, there were at least 2 empanada places near my house back then and I stopped by one on Av. San Lorenzo street.

Very cute woman with such a nice smile and a decent body.

To be BRED by the WHITE MAN.

*anyway BACK to the story*

So I ask for two pepperoni and cheese empanadas and thankfully they had them that day.

These two empanada places near my place back then never made enough of them but thankfully they had some left that day.

"Oh sorry I can't take this" she tells me with a nervous smile.

"Filthy slut, you're BEGGING for daddy's punishment now, aren't you?" I thought.

"Why not?" I asked while distracted by her BIG BLACK MEXICAN TITS.

And she begins to explain how the bill isn't any good because the strip to the side is removed.

I asked her to clarify.

She assures me that it isn't but that, without the strip on the side, it can't be accepted.

"So what do I do with it?" I asked while playing my best "innocent foreigner who don't know how things work here" role.

Which wasn't much of a play since I legit never got a bill that is fake but also useless in Mexico.

Seriously Mexico? Legit bills that are useless? Why the fuck do you guys run anything? Can't even make your own currency properly? I never had this problem in the US. JUST SAYING.

Anyway, she told me that I could take it to the bank -- any bank -- and that they'd definitely replace the bill for me since it was legit.

Which also made me wonder "what would they do with the useless bill?"

After all, they surely wouldn't then pass it off to someone else, would they?

OH WAIT THEY DID WITH ME AT THE ATM MACHINE.

Anyway, I take the "legit but useless" 200 peso bill back and gave her another one.

Sweating bullets hoping that this one is OK. They wouldn't give me 100 bucks of useless bills, would they?

Oh wait. I'm in Mexico. YES THEY WOULD.

But, with the luck of the Aztec Gods, the next 200 bill was legit OK.

And, while she was warming up the empanadas, I began checking the other bills I got from the ATM machine to make sure they were legit.

"They look OK" I thought.

Then I take the empanadas and go across the street to order some tacos al pastor from one of my favorite restaurants in the area known as Taqueria Flamita.

I decided to change plans and maybe have the empanadas for later and so I ordered some tacos from the next place while hoping I could sneak the fake 200 bill to them.

But changed my mind quickly and instead ordered an alambre.

Anyway, once the alambre was ready, I handed over the useless 200 bill.

But, unfortunately for me, she caught the mistake on the bill.

The woman at the front knew me and was nice about it.

At first, she almost accepted it as she was bending over to get some change but noticed in the last second that it was a bullshit bill.

Long story short, she told me it was a real bill but just bad because of the lack of strip and even asked her manager if they could accept it as I was a regular but they said no.

Anyway, I asked this lady "what can I do with it?" and she wasn't sure but I asked her to confirm if I could exchange it at a bank.

She said "maybe but I'm not sure."

Given I don't have much trust in Mexican institutions, I wasn't confident either that a bank would take a fake bill.

After all, THEY were the ones who gave me it!

Why would any of them take it back?

Anyway, I wasn't sweating too much over it as I figured I could somehow trick SOMEONE to take it if the banks were to tell me to fuck off.

I couldn't go to a bank that day because it was a Friday or Saturday and the empanada lady told me they were closed until Monday.

During the walk home that same day after getting my alambre, I did stop at 4 or 5 different corner shops to buy a water bottle with it.

None of them accepted it.

They all saw through me.

It wasn't until a day or two before I ultimately moved out of Iztapalapa where I finally got rid of the "legit but useless" bill.

I ordered a double meat and bacon hamburger and fries from a lady I had bought from before on Facebook.

In Mexico City, you have Facebook groups for different colonias or neighborhoods and they are useful for finding local people in the neighborhood who advertise food they make in their garage to anyone else living in the same neighborhood.

Often the food is quite good and pretty cheap. Free delivery as long as you live within walking distance in the same neighborhood. No tipping expected even.

So this lady shows up with the food.

As I walk to the door, I fold the bill and have the bit where you see the missing strip facing the floor instead of within eyesight.

Took the food first and then handed her the bill.

She put the bill in her pocket right away without even checking if it was fake and gave me the expected change as she knew I was paying with a 200.

Then I told her "buenas noches" and shut the door immediately.

Maybe she did exchange it at a bank.

Perhaps she gave it to someone else like some form of "hot potato" where some other bastard will have to figure out how to get rid of it.

Your guess is as good as mine!

Here's a picture of the bullshit bill by the way.

Anyway, for purposes of this article, I tried to find a Spanish language source from Mexico (preferably a government source) telling you how to get rid of these bullshit bills without the strip to the side.

One that would confirm that banks are required to take them.

I couldn't find anything saying that on Google.

Perhaps Youtube has a video on it or maybe I didn't type in the correct words into the Google search result.

Anyway, if you do find yourself in this situation, I guess your best bet is to just take it to the bank.

Let me know how that goes.

No seriously. Let me know. I managed to get rid of the bill before Monday rolled around so I didn't even try.

If though you either don't try going to the bank or they tell you to fuck off, what should you do?

I'd try passing it off to an informal person.

Somebody working at a professional business -- be it a mom and pop corner store, empanada business or whatever -- will be more likely to catch the mistake.

Though, when I lived in Tlahuac of Mexico City, there was a corner store next to my apartment building where they had an old man that looked to be 90 working there.

Very slow dude also who appeared to have an IQ of someone with down syndrome.

When I was trying to exchange that bill that day to the 4 or 5 corner stores in Iztapalapa, I was genuinely thinking "god damn, I wish his store was around here."

But, assuming you can't find a store run by seniors with down syndrome, then your best bet would be an informal worker.

Maybe one of those kids selling candy in the street? I bet they wouldn't notice.

Though would they exchange a 5 peso purchase for 200 bill?

Or, like I did, shoot for one of those people selling food informally on Facebook "colonia" groups.

Especially if you are a regular with one of them and they trust you more.

Give the bill then to one of them like I did.

At night. When it's hard to see. No lights. The lack of strip facing down to the ground and not within eyesight. Folded in half.

If they or anyone discover it though, don't be an ass.

Just take the bill back. Perhaps give a dumb "oh I'm confused, why this bill bad?" show and dance.

Then try your luck on the next person.

I'm sure you'll pass it eventually to someone who works a more informal job.

I wasn't too worried about it because I half believed that HOT BLACK MEXICAN SLUT that some bank would take it and, if not, surely I could get some Mexican to not notice the flaw with the bill.

Plus it was only 10 bucks anyhow.

It only took me 1 try after giving up on the corner stores though.