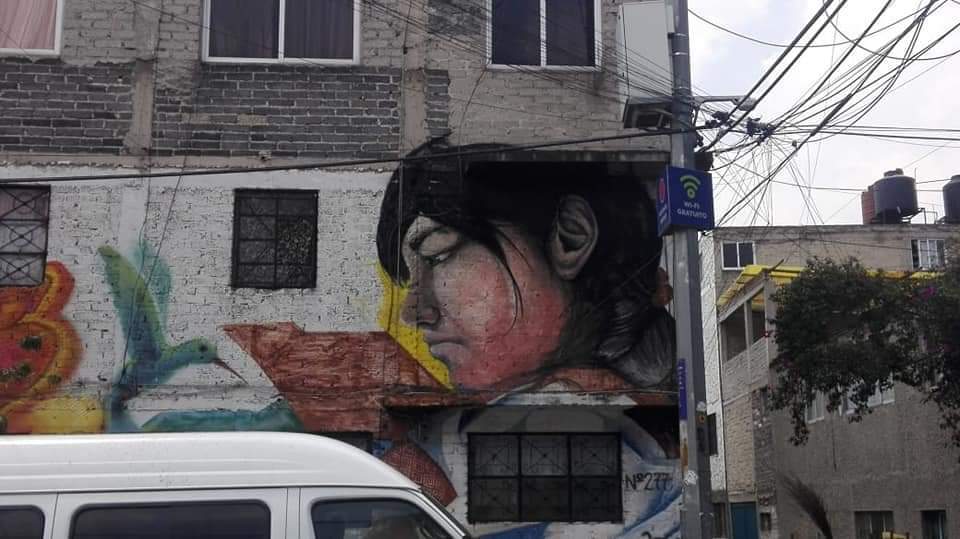 While I have said this a few times now, this will probably be the shortest article I have written on life in Latin America.

Mostly because I don’t have any stories to tell in relation to this.

So what’s the topic?

Well, a few months ago, I got talking with my sister about life in Mexico City.

Sent her some photos.

In the photos, like these ones here, you could see just how beautiful Latin America is!

Just look at that street art!

OK, none of you think it is beautiful.

I think it looks OK anyhow.

Still, she noticed a particular detail that I didn’t give any attention to.

Those wires hanging pretty low and all close to each other.

At the time, I looked at the photos I sent her and thought “well, sure, looks alright.”

But she remarked how it’s common to see that in poor areas of the US.

Run down parts of urban cities in the US and all.

But supposedly not as common up in the states.

And, truth be told, I didn’t really think of those wires as being an example of that.

Simply put, I didn’t give any thought to them whatsoever.

Even in nicer areas of Mexico City, I’ve seen this before.

You see infrastructure like that enough and it does look normal overtime.

I didn’t disagree with her though.

Thinking about it now, what she said makes sense.

Looking back at the last time I was in the US over 2 years ago, I don’t remember seeing any wires hanging that low in my small town where I grew up.

Of course, comparing a small town to a big city is always different.

How many areas then in a place like Columbus have wires hanging that low?

Where they could, in theory, pose some risk to the community?

While I’m not familiar with the whole city, I do know Columbus a tiny bit better than most urban cities in the US and don’t recall seeing anything like this over there either.

And, since she said that about the photos I sent her, I did keep an open eye to any low hanging wires in other areas.

Just to actually pay attention to this little detail and see if it’s common elsewhere.

Low and behold, it is.

In numerous points around the city, I have seen this to be the case.

While I don’t carry my phone outside usually, I do have some photos of other areas of Mexico City that are nicer where you can see more low hanging wires for those curious like these here.

For one, as I said, I think you get used to examples of “lesser development” while living in Latin America.

Even in nicer areas of Mexico City like in the photos above where one of them shows Roma Norte area (a touristy spot for expats), you can still see more low hanging wires from the looks of it.

And I remember seeing a few when living over there.

Though not as obvious as where I live now to be fair.

Still, it doesn’t bother me and I think there’s a point to be made that you get used to scenery of lesser development when living abroad.

Second, does this small aspect to life here impact you in anyway?

For me, not really.

Though, as I say that ironically, I did have my power cut off for a few minutes literally yesterday.

The specific neighborhood that I live in had some small electrical issues that lasted about a minute or two and then everything was back to normal.

Anything to do with those low hanging wires?

You be the judge.

Third, does this happen as commonly in other parts of Latin America?

I’ve been to most countries in Latin America but my memory doesn’t serve well as to how common it is to see so many low hanging wires all mixed in together in various spots.

As I said, maybe you get used to the sight?

But it’s also been years since I’ve been to any other country in Latin America and I don’t remember walking around taking notice of this very specific and small topic in other Latin American countries.

If I had to guess, I’m sure it’s noticeable in other Latin American countries but how noticeable probably does depend, like with anything else, on which country you are talking about.

Still, while I don’t feel like looking at my old photos of my time traveling elsewhere, you can check them out if you are, for whatever reason, curious to see if this is as common elsewhere in common and not as poor areas. I have plenty of photos anyhow already posted on this website.

It’s such a small topic to life down here but I figured I might as well write an article on it because maybe at least 2 people can relate to it.

And 2 is probably  generous given so much of the audience curious about Latin America seems to have more interest in “fucking hot Latinas” then “low hanging wires.”

Not that I can blame them!

Either way, if you have anything to add to this very small topic, add a comment below in the comment section.