Should You Speak Spanish in Brazil? 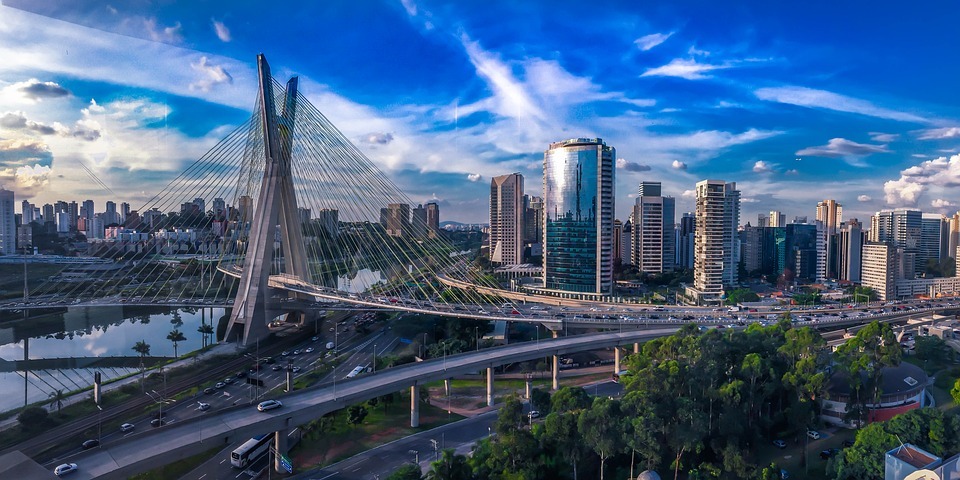 A fact that the whole world knows.

Just the other day, I walked into a SAMBA bar in Rio de Janeiro.

I lit up a Cuban cigar and did a little dance to the dance floor.

With all of the confidence that 9 mojitos could give me that night.

As I danced up to the floor, I saw this nice Brazilian girl.

She was SO EXOTIC.

A feisty Latina she was, I tell you gentlemen.

She looked at me and did a little “rawr rawr.”

For it is the Latina that acts so WILD at the sight of the white man in her rainforest.

Ever since the days of Cristobal Colon, these Latinas get SO WET at us white men, don’t you know?

And we begin dancing.

Then while it begins good..

She looked confused at my mojito and asks “this isn’t a caipirinha, is it?”

Then asked me “what cigar is this?”

I tell her Cuban!

“Arapiraca no?” she responds.

And I could tell she grew a disinterest in me.

“Baby, what’s wrong? You don’t want to practice Spanish with me tonight?”

That’s when she took my mojito and splashed me in the face with it.

“I guess Brazilians don’t like speaking their native language Spanish?” I asked myself.

No Love for Spanish in Brazil?

Though my imagined story will only stay that – an imagination…

There are plenty of people out there who think that Brazilians speak Spanish.

Or that they listen to common Latin music listened in other Spanish speaking countries.

For example, as you can see in this video of 90 Day Fiance here, they played some music that you wouldn’t hear in Brazil when introducing a Brazilian woman named Larissa.

Perhaps a type of music more common in Cuba than Brazil?

Likewise, I remember one time coming back to Ohio from my initial trip in South America.

There was a guy named Kevin that went to the same college as me who asked me questions about what it was like.

He’s a cool dude and we got along very well.

He did ask a dumb question though about Brazil.

“People speak Spanish there too?”

And, funny enough, that’s not the first time I knew someone who confused Brazilians for speaking Spanish.

A month or two ago, I got talking with my sister over the phone.

And I had some Brazilian music playing.

And she could hear the music.

She asked me if I could see myself living in Brazil given my apparent interest in the music at the moment.

And also said something implying that “Spanish is common there or no?”

I actually think she asked in as a question.

Being that she wasn’t sure if there’d be a linguistic problem for me because she couldn’t remember if they spoke Spanish or something else.

For either Kevin or my sister.

Neither one is Brazilian.

Yes, I get Brazil is a big important country but I don’t hold it against people for not knowing something like that.

Especially if they don’t plan on living in Brazil and are focused on their own lives.

So many people in the world are like that – focused on their own lives and not planning on being some world traveller visiting these places.

If you live in a small town in anywhere of the world with kids to raise and a job to pay rent, then you aren’t reading up on the latest of Brazil outside of the occasional news headline.

So let’s give folks a break here – you got plenty of folks who have inaccurate ideas about other countries of the world in small towns and big cities elsewhere.

Trust me – as an American, I’ve seen plenty of ignorance about Americans and the US down here in any Latin country you want to name.

So let’s get off the high horse.

But, having said that, I get it.

I get why a Brazilian would get irritated at the idea of someone thinking that their country speaks Portuguese if the stereotype is common enough.

One person thinks that? You laugh and correct them nicely.

Countless people do? OK, I see where your frustration comes from.

But, being honest with you, I get why some foreigners who actually visit Brazil would resort to Spanish.

I was one of them actually!

My Trip to Brazil

I’ll keep it brief because I’ve covered my time in São Paulo on a few occasions on my blog.

Then we’ll get to the meat of the article with my own thoughts on this subject.

So, on top of my head, there were two moments at least where I tried speaking Spanish with the locals in Brazil.

The first one was when I was at a restaurant in the city mentioned above.

The waiter didn’t understand English if I remember right.

I just ordered whatever was on the menu and, thankfully, it was actually good.

Then there was this older woman in a store when I was looking for a wooden bird to buy for my mom.

And she didn’t understand Spanish.

So I did my best to get her to understand what I was looking for because she had a bunch of wooden animals on this table for sell.

She never understood me.

For those more familiar with Latin America, it’s easy to see why you’d think that a Brazilian understands Spanish.

So let’s get this straight – it’s not like half of Brazil speaks English and such a TINY MINORITY speaks Spanish!

Get over ourselves, Brazilians.

And I emphasize “get over yourselves.”

From what I’ve seen online, it does seem like some Brazilians get bitchy at a foreigner speaking Spanish to them because of the following:

Look Brazilians, let me clarify a few things for you all.

First, most of you don’t speak English.

As the source above says, only 7% of you do.

With many others who probably understand bits of English but not enough to truly speak it even conversationally.

Second, not speaking English well or at all doesn’t mean that YOU AREN’T EDUCATED.

It’s only everyone in the non-English speaking world that thinks this (outside of Latin America too).

You can be PERFECTLY educated and not speak English.

Have some fucking self-respect for your own culture.

And, as a native English speaker, I genuinely don’t give a fuck if you speak English.

It doesn’t impress me.

I don’t expect you to speak English in the same way that you wouldn’t expect me to speak Portuguese.

If one speaks the others language though, that’s cool!

But it doesn’t mean that you are Einstein.

Third, your country is surrounded by Spanish speaking countries. Try to understand that it’s easy to see why some foreigners from anywhere in the world would get confused. They aren’t Brazilian and many don’t give a fuck about your country outside of the occasional headline bitching about Bolsonaro or whenever 90 Day Fiance shows footage of a Brazilian chick that gets simps hard.

Fourth, let’s be real here – you all understand some bits of Spanish.

Spanish isn’t my native language but I’ve been learning it for close to a decade now with VERY LITTLE experience learning or speaking Portuguese.

And I have ABSOLUTELY NO EXPERIENCE with Italian.

Despite my weakness in both languages, I can understand bits of them as a non-native speaker of Spanish.

Well, to be fair, Italian is much easier than Portuguese for me.

With Portuguese, I have MUCH better understanding of anything written down than spoken.

So if you happen to not speak English (AND THAT’S PERFECTLY OK, DOESN’T MEAN YOU AREN’T EDUCATED), and some gringo shows you a piece of paper written in Spanish…

Look, I’m willing to bet 5 bucks that you at least understand a word or two if not the entire sentence possibly.

You are surrounded by Spanish speaking countries that do carry more influence on some of your border states and you speak a language that has similarities to Spanish.

Stop trying to pretend that you literally don’t understand a lick of Spanish.

At least if it’s written down!

Fifth, if said gringo tries speaking Spanish with you, don’t take it offensively.

Get that he might be ignorant but we’re all a little bit ignorant of something.

I guarantee you that you’re ignorant of some shit about the US and other countries of the world.

And, on top of that, it’s understandable why he might go there.

As you saw in the examples of my brief time in Brazil above, I tried English!

So I tried Spanish!

In that context, it’d be understandable why a gringo chose Spanish if English didn’t work.

In the same way how, a year ago, I saw a team of waiters in Mexico City try speaking English, Spanish and Portuguese to an Asian client in a restaurant called Casa de Toño.

They are the languages of the Americas!

Outside of a few others like French to be fair.

At any rate, there are various reasons for why a gringo might speak Spanish to a Brazilian outside of ignorantly believing that Brazilians speak Spanish natively.

Having said that, let’s answer the question of the article.

Should You Speak Spanish in Brazil?

As I said, I get why Brazilians can get irritated at this.

There is plenty of ignorance from many about what your native language is.

Though I can understand why people might have these misconceptions about your country’s language, I will concede in saying that your frustration is understandable.

I’m only saying that there are various reasons for why they might speak Spanish to you outside of an ignorant belief as I laid out in before.

And so should you speak Spanish in Brazil?

I have very limited experience in the country so someone with more experience should chime in.

But I’ll shoot from the hip here and give my advice after years of traveling to other countries in Europe where I didn’t speak the native language.

First and foremost, I’d say obviously you should learn Portuguese if you plan on living in Brazil long term.

If you only plan to visit for a month, then learn some basic words but don’t expect to actually learn the language for such a small commitment.

Second, if you don’t know Portuguese, then go for English before Spanish.

As we saw before, apparently 7% of Brazilians speak English and 4% speak Spanish.

So, statistically speaking, English is more likely to be understood.

On top of that, I’d be willing to bet each generation going forward will be much more interested in learning English over Spanish as that is what I see elsewhere.

Fourth, if the local doesn’t speak English, then try Spanish. If they don’t understand your verbal Spanish skills, then maybe write out the Spanish sentence on a paper or something? Given the similarities between the two languages, it’s definitely possible that it’ll be understood.

Sixth, if you are in one of Brazil's larger and more well-known cities, then I can see English working a little bit better for you than Spanish as you'll probably have even more locals who have learned it.

Anyway, should you speak Spanish in Brazil?

Depends on the context but I can see where it would be understandable for the gringo to speak it.

Just depends on the context!

But that’s all I got to say for now.

Previous post: “Los Mexicanos Amamos a los Extranjeros!” Next post: Bad for Gringos to Use Spanish Slang in Latin America?