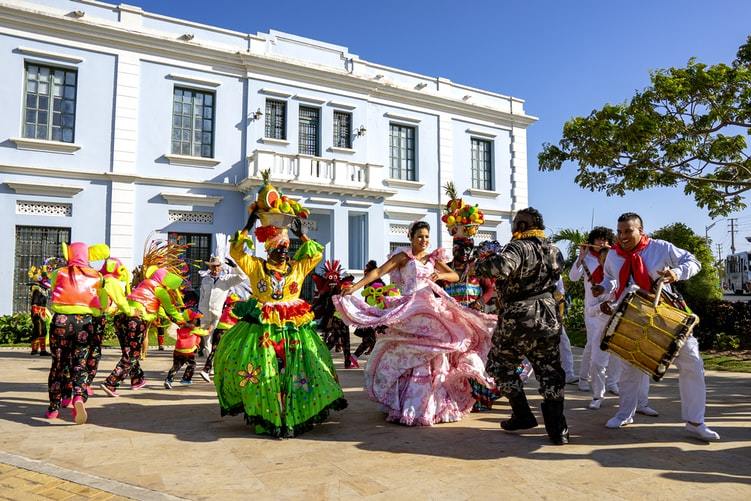 I was spending about 7 months there in total from around January more or less into the summer.

Anyway, I had taken a two week trip into Patagonia around Chile and Argentina..

And when I came back, I was able to enjoy one of the biggest carnivals of Latin America..

In fact, it is argued to be the biggest carnival in the world outside of the one in Rio with around 1.5 million people attending it as you can read here…

What carnival are we talking about?

Now the usual dates for the Barranquilla Carnival are around Spring time – so think February more or less but the exact dates are different every year.

Anyway, I attended this carnival once in my life and hope to come back…

As it was quite memorable and recommend for anyone traveling around Latin America.

I often feel this carnival is overlooked by many despite its regional importance and the fun you can have when it is hosted.

And, of course, all of the rumba – music, hot Colombian chicks and plenty of beer.

So let’s get to it – first by covering the basics to know about this event and then my experience there.

What is the Barranquilla Carnival?

Anyway, like I said, the event is held around spring time.

Just a few days before Holy Month for about 4 days sometime in either February or March usually.

For 2021, the event is apparently scheduled from February 13th to February 16th.

During this time, you can enjoy a wide variety of events that will be held.

The first day of the event is always on a Saturday from my understanding and is started off with something called La Batalla de Flores.

Here’s a video of that event here below.

In which there is a big parade with various people dancing and performing as they walk down the road.

Then you have another big parade on Sunday that is similar with lots of folkloric dances and music called the Gran Parada de Tradición y Folclore.

Here’s a video of that event here below.

Both of these events are held on Monday in which the first one is another parade and the second event is an orchestra festival at a place called the Romello Martinez Stadium where you will hear a wide variety of Latin music being played.

Here are two videos of those events here below.

On the last day of the event on Tuesday, you have some event known as the burial of Joselito Carnaval. Basically, this burial is supposed to represent the end of the carnival.

Here is a video of the event here below.

Most of the events held, from my memory and understanding, are done on Via 40 avenue.

Anyway, you have a wide variety of other events held during the week in between and during the events mentioned above.

For example, there is an event called the Festival de la Cerveza where you can have plenty of beer and meet other folks celebrating the occasion.

And listen to some cool music.

Here is a video of the event here below.

And speaking of meeting people…

You are going to notice lots of activity in general in the street and at bars.

All around, it will be fairly easy for you to meet new folks.

Hookup also with a few of the local chicks.

And have a good time.

Now having covered the basics of this event…

Then check out the website for this event here.

As is any typical day in Barranquilla, it was pretty hot outside.

If you spend even just 5 minutes outside just standing somewhere, it was pretty typical for me to be sweating.

Anyway, I was living in Barranquilla for about 7 months roughly speaking and was there with some other Americans who I happened to meet while there.

I remember having to buy the ticket for myself at some shopping mall ahead of time – I think it was called Buenavista.

Which was the closest mall to where I lived at the time.

Well, the ticket itself wasn’t too expensive – maybe 30 bucks more or less? Something along those lines…

So one on the day of the event…

We were waiting for someone we knew to stop by as we were going to walk to the nearby entrance to the carnival on Via 40 avenue.

While waiting, we saw some homeless looking dude steal some guy’s hat down the street.

And then the guy we were waiting for showed up and we went to the entrance.

Once past the entrance, we saw lots of people sitting down on both sides of this road for as far as you could see.

Plenty of folks selling stuff on the street too obviously – water, drinks, beer, food of any kind, etc.

We get settled down into our seats and the show begins soon enough.

Here are photos I took of the event that you can see below.

I remember basically just a wide variety of Latin music being played, lots of sexy chicks dancing down the road and people dressed up in different costumes and so on…

There was one dude dressed up as Mario for example.

There were folks dressed up in different folkloric costumes that had some importance locally for sure.

Also, you had some references to, from what I could guess, Colombia’s history with slavery.

One of the American guys with us – who was black – wasn’t very amused about that.

And also, funny enough, I think one or two of the American chicks we had with us didn’t like seeing some of the women dancing down the street in more minimal clothing.

Maybe out of jealousy – who knows.

But I guess there’s a lesson in that itself in both of those examples above – Americans coming down here and perhaps finding a local practice or custom to be strange or offensive.

Just what happens when people encounter new cultures obviously -- perhaps not as PC for their tastes.

Anyway, here are more photos of the parade below on Saturday…

Also, here’s a video of that parade again below here.

And it basically just went on like that forever and ever – bunch of people dancing and moving down the street with different types of Latin or folkloric music being played.

I ended up leaving the parade a tiny bit early by about an hour or two as I had a date set up with some chick that I was going to try to hookup with.

I came back anyway the next day or two to check out the upcoming events.

Such as the Beer Festival – here’s another video of that below here.

It was pretty cool – the ticket for that also wasn’t very expensive and got to meet up with some new people and listen to music.

Including meeting some cute chicks that seemed down to fuck.

But it was mostly just that from my experience – have some beer and meet some new people.

And so as I left the parade on the first day….

And really the rest of the week during this carnival…

You could see lots of people out in the street in most parts of the city having drinks and a good time with music playing everywhere.

I did also attend some of the smaller events but didn't spend too much time in either of the two ones below.

For example, if I remember right, they had some event called salones burreros where you can basically meet up with new folks – music playing, dancing, plenty of beer, etc.

There was also some other event like that or something similar from what I remember.

I had to look it up because I forgot the name but apparently it was called verbenas.

Anyway, here's a video of one of them from Youtube that show what one of them looked like since I didn’t take any pictures of these events specifically and don't remember well this event.

Were those events worth it also?

For the most part – sure.

Anyway, let’s wrap this up.

So was the Barranquilla worth it overall?

Being honest, I wouldn’t travel to Barranquilla from outside of Colombia just to visit the carnival itself….

Unless you happen to have a thing for Latin culture in general and want to experience one of the biggest carnivals in this region.

In that case – it’s absolutely worth it!

Then I’d absolutely visit without any question – it’s very memorable.

Entertaining and a good way to experience the local culture.

Easy to make new friends and have a good time with any friends you coming to visit the event with.

And also just makes a great event in general for drinking and hooking up with cute chicks.

Either local ones and also foreign ones as you have an OK amount of foreigners visiting during this time.

Anyway, if you got any questions or comments related to the Barranquilla Carnival, drop them below in the comment section.

Previous post: Iguazu Falls: Largest Waterfall System in the World Next post: Moving Around Vs. Settling Down in Latin America